When is the best time to go to Antarctica?

Home > Blog > When is the best time to go to Antarctica?

When you decide to go on a voyage to Antarctica, one of the first decisions you need to make is when to go. It’s one of the most common questions we hear, so here are some tips to help you decide:

Due to the Earth’s tilt and orbit around the sun, Antarctica has two distinct seasons – winter and summer. For six months of the year Antarctica is surrounded by sea ice, making it all but impossible to get there.

Winter in Antarctica begins in April. Whales begin their long migration towards the equator to breed and most penguins flee north with the advancing ice edge. Sea ice around Antarctica almost doubles in size, and the only warm-blooded animal that remains on the continent is the staunch Emperor penguin.

A great silence falls over Antarctica as the continent is plunged into darkness. The sun disappears below the horizon, and for a few weeks in the middle of winter it doesn’t rise at all.

The return of summer

By October the days are beginning to lengthen. With the return of the sun and the break-up of sea ice, Antarctica sees a revival of its wildlife – and other visitors from afar. 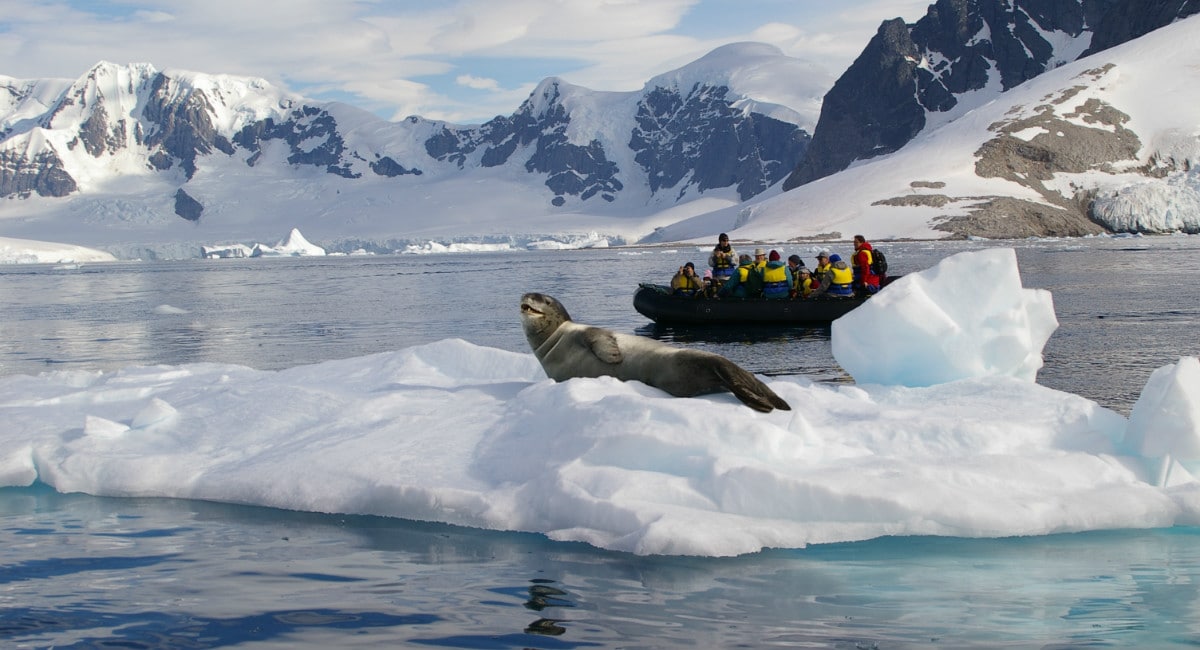 When should I go to Antarctica?

The Antarctic tourism season runs from October to March, and each month has its own unique charms.

With fresh white snowscapes, oceans littered with residual sea ice and slow, luminous sunsets, Antarctica in October and November is a photographer’s dream.

From October onwards, penguins return to the Antarctic Peninsula en masse and waddle up the snowy slopes to build their nests out of small stones. Whales begin to return to their feeding grounds and penguins start their courtship rituals.

Deep snow can make for a good workout at some landing sites, so it’s worth doing that extra bit of training before you leave home, and don’t forget your trekking poles!

By November you might be lucky to spot an egg or two tucked in beneath a penguin, although the timing can vary between locations.

If you keep your eyes peeled, you might catch a glimpse of a baby seal hauled out on the ice with their MUCH bigger parents!

Summer arrives in earnest in December, with penguin colonies abuzz with new life. Most penguin chicks hatch during these months, so this is the perfect time to witness them in their adorable downy plumage.

The ocean is teeming with life, so keep an eye out for whales feeding, groups of crabeater seals hauled out on ice and even the occasional elephant seal and pup on land! By the end of January chicks are starting to form creches, tearing through the colony like a gang of school kids, and adults begin to moult.

As the days become longer and temperatures across the Peninsula increase, much of the new snow at sea level begins to melt, exposing rocky shores. Many visitors find trekking poles a handy addition to their gear list.

By February the breeding and feeding frenzy of mid-summer has eased. Most adult penguins finish moulting and take to the sea with their freshly waterproofed plumage, although some stay until well into March.

Young penguins born earlier in the summer flourish in the crowded colonies, going through a quick adolescence and preparing for adult life at sea. Watching as they take their first tentative steps into the water and learn to swim is an absolute joy!

This is a great time of year to watch for whales feeding on the abundant krill. Also keep your eyes peeled for leopard seals, often spotted resting on the ice near penguin colonies.

The late summer landscape bursts with colour as snow algae decorates the ice with bright splashes of pink and green. It may look appetising but we don’t recommend eating it – apparently the ‘watermelon snow’ can have a laxative effect!

By the end of March the days are becoming noticeably shorter, with breathtaking sunrises and sunsets a photographer’s delight. The sea ice begins to creep in, a sign of the approaching winter.

Whenever you decide to visit Antarctica, you can be sure that it will be an experience unlike any other. To start planning your adventure with Aurora Expeditions or find out how to get to Antarctica, get in touch with our helpful team, or explore our brochures online for more information.

Nina has been drawn to the polar regions since her first otherworldly experience of the midnight sun in 2002. Since then she has spent time in far northern Canada, the Himalayas, the Alps and deserts in America and Australia, always seeking out quiet, wild corners to explore. She feels immensely privileged to travel to these places and shares her passions for the natural world, human stories and adventure with all the wonderful people she meets.