The results are in from our 2017/2018 Antarctica Photo Competition! Thank you to all the expeditioners who entered. The winners are Ron Irving (first prize winner), Noelle Morgan (first runner up) and Natasha Haggard (second runner up). Ron and Noelle travelled on the South Georgia & Antarctic Odyssey expedition and Natasha travelled on the In-Depth South Georgia & Antarctica expedition. Congratulations from all of us at Aurora Expeditions!

We must also extend a big thank you to our photo competition judge, Peter Eastway. Peter is one of our Antarctica expedition photography guides, author of the Lonely Planet’s Guide to Landscape Photography and winner of the 1996 and 1998 AIPP Australian Professional Photographer of the Year Award. We are very honoured to have Peter on our Antarctica voyages, teaching his tips and tricks to our expeditioners in our free polar photography workshops. Peter will again be joining us on our In-Depth South Georgia & Antarctica expedition, departing this December.

Check out the winning photos below and then click through to our Facebook gallery to see our selection of entries. 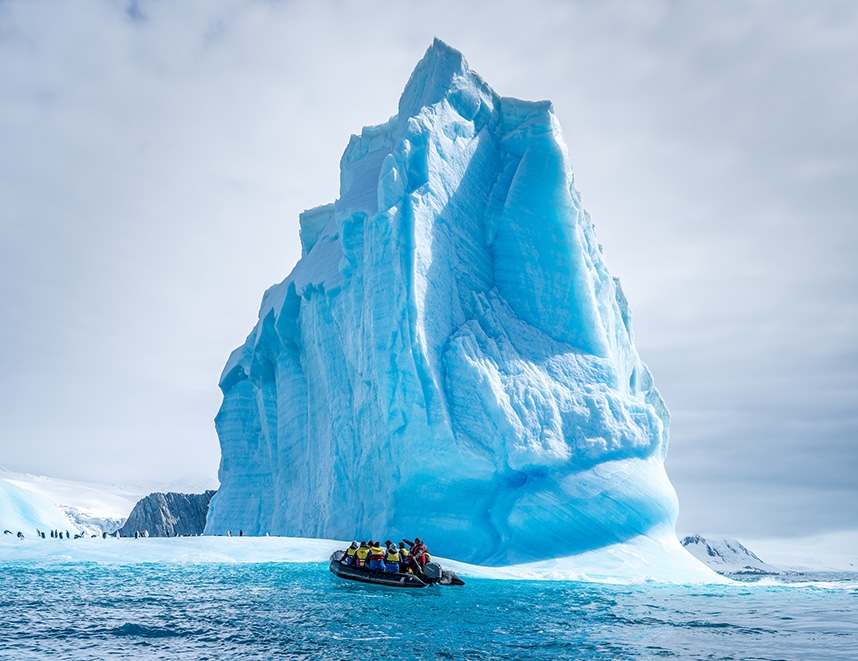 Competition Judge Peter Eastway says: “There is nothing more iconic than an iceberg when it comes to depicting the polar regions, but few iceberg photos have a sense of scale – and scale is what creates awe when we view these huge ice structures up close. This photograph of a blue iceberg shows the local wildlife resting in its shadow and a group of travellers in front, providing a keen sense of scale and majesty.”

1st Runner Up – ‘The Portal’, by Noelle Morgan at Portal Point, Antarctica on our South Georgia & Antarctic Odyssey Competition Judge Peter Eastway says: “This iceberg keyhole is a wonderful exercise in rim lighting, the photographer picking just the right angle to feature the play of sunlight on the icy shapes. A nice tight crop simplifies the composition – beautifully seen.”

2nd Runner Up – ‘Back Off’, by Natasha Haggard at Elephant Point, Antarctica on our In-Depth South Georgia & Antarctica expedition Competition Judge Peter Eastway says: “Great timing! A predatory skua floats a little too close to a nesting Gentoo, exciting her mate into action. As a nature photograph, there’s a great story here, expertly depicted and one that all voyagers get to see when walking ashore in the Antarctic regions.”

See some of our favourite entries below!