A dozen passengers who had travelled on Aurora Expeditions’ In Shackleton’s Footsteps adventure in March 2016, gathered in London on 20 of May for a very special commemoration: on that day one hundred years ago, Ernest Shackleton and two companions shambled into Stromness whaling station in South Georgia. They sought rescue for the shipwrecked members of the Imperial Trans-Antarctic Expedition stranded across the Scotia Sea on Elephant Island.

Friends from around the globe reunite in London

To commemorate this historic moment in the annals of polar exploration, friends from three continents who had recently met on the Polar Pioneer as it traced the route of Shackleton’s legendary adventure reunited in London, UK. They came to attend a regal celebration of the expedition held at Westminster Abbey, and to see one another again.

Shackleton would have relished the occasion. The pomp and glory of the British Empire was on full display to honour his Argonauts and their legacy during the “Centenary Service of Thanksgiving for the Courage and Endurance of Sir Ernest Shackleton CVO and His Men.” [CVO stands for “Commander of the Royal Victorian Order.”] England’s most famous church was filled with 2,000 attendees that included royalty, celebrities, descendants of the expedition members, and dignitaries.

During the hour-long service of traditional hymns, prayers, and speeches, a most peculiar but marvellously apt musical interlude resounded within the walls of Westminster Abbey: a banjo solo. The poignant tribute reminiscent of Leonard Hussey’s banjo tunes that helped bolster the men’s morale during the over nineteen months they spent stranded on the ice evoked the spirit of the Endurance Expedition in a way perhaps no other sound could.

A commemoration led by royalty, family and Antarctica representatives

Her Highness Princess Anne, Patron of the United Kingdom Antarctic Heritage Trust, gave the New Testament scripture from Philippians Chapter 4 in a crisp, commanding voice that left no doubt listeners were hearing royalty speak.  Upon her arrival, two thousand people stood respectfully as she held an unhurried chat with the clergy gathered to greet her inside the Great West Door.

The Honourable Alexandra Shackleton, Sir Ernest Shackleton’s granddaughter and president of the James Caird Society, delivered a quote by Frank Worsley, captain of the Endurance, extolling Shackleton’s courage. Prayers were led by, among others, Dr Joseph Spence, Master of Dulwich College, which Shackleton left at age 16 to go to sea and which today houses his legendary boat, the James Caird;

Professor Julian Dowdeswell, director of the Scott Polar Research Institute; Colin Roberts, Governor of the Falkland Islands; Sarah MacIntosh, representative of the Government of the British Antarctic Territory; Donald Lamont, chairman of the United Kingdom Antarctic Heritage Trust. Michael Palin, actor, adventure traveller, documentary filmmaker, and former president of the Royal Geographical Society was among the dignitaries but did not speak in the service. In his sonorous address, Dr Richard Chartres, bishop of London, extolled Shackleton, knighted at the “high noon of empire and of the Edwardian Age, “as a “genuine hero with extraordinary leadership gifts, which continue to inspire emulation at a time when in so many fields there is a need for inspiring leadership.”  Recounting the Endurance Expedition, he called it “possibly the greatest example of survival in Antarctic history” and praised Shackleton’s unflagging optimism that pulled the men through. “He instilled hope and belief that they would all survive,” the bishop proclaimed. “On the ice, Shackleton revealed a humbling greatness of soul.”

While his address was not a sermon, the bishop remarked on certain spiritual qualities that Shackleton and the expedition possessed. “Everything depended on one’s comrades and the quality of leadership.”  He pointed to Shackleton’s love of poetry, quoting the last line of his journal written in Grytviken harbor the night of his death: “A wonderful evening.  In the darkening twilight I saw a lone star hover like a gem above the bay.”  The bishop alluded to Shackleton’s romantic, poetic view of life in the explorer’s invigorating summation of the Endurance Expedition, “We had pierced the veneer of outside things.  We had seen God in His splendours, heard the text that nature renders.  We had reached the naked soul of man.”  The bishop also highlighted the renowned “Fourth Presence,” the impression that Shackleton, Crean and Worsley each independently experienced as they trekked across South Georgia at the extremity of their strength that an additional unseen traveller accompanied and sustained them.

He mentioned as well that it was appropriate on this occasion to remember the members of the Ross Sea depot laying party, and Spencer-Smith, Hayward, and Mackintosh, the three of that leg of the expedition who lost their lives.

>> Listen to the address given by Dr Richard Chartres, Bishop of London.

After all recited the Lord’s Prayer, Mike King, member of the string band Hayley Moyses Britgrass 3, spellbound the hushed assembly as he played an Irish tune, “Lament to Kildare” on his banjo.  He confirmed afterward that in Westminster Abbey’s 1,000 year history, a banjo has never before been played during public services.  He owns a replica of Hussey’s banjo but did not use it for the service as it is on loan to the musical group Mumford & Sons.  (Hussey’s original banjo is in the National Maritime Museum, Greenwich, but is currently not on display). 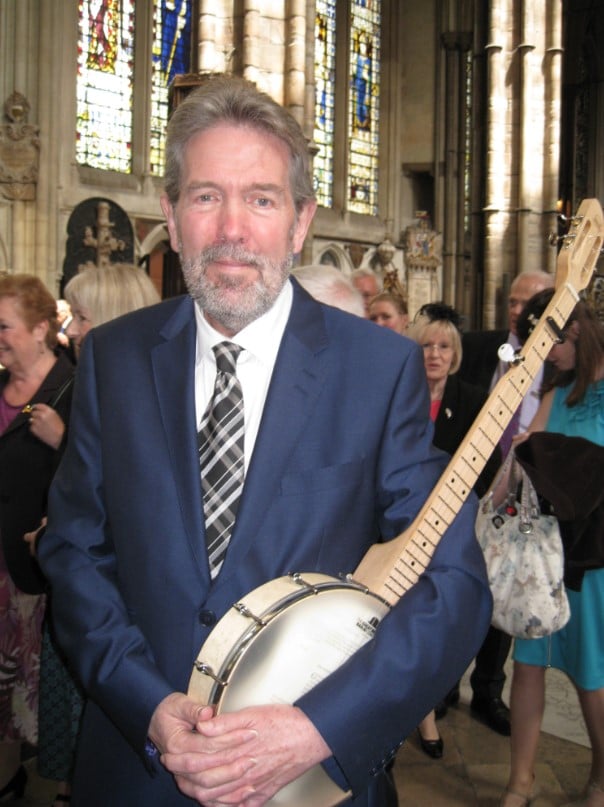 King’s solo was followed by Tim Jarvis, leader of the Shackleton Epic Expedition (the story of which is available in the PBS video documentary series, Chasing Shackleton) reading Shackleton’s original poem Erebus.

The service concluded with the congregation joining to sing the great seafaring hymn, Eternal Father, Strong to Save and the National Anthem, God Save the Queen.  All stood as the Royal Princess processed out with her husband, Sir Timothy Lawrence, followed by other honoured guests, to be greeted by a large crowd and the media waiting outside the Great West Door of Westminster Abbey.

“Today’s service was one of the most moving moments of my life,” stated Capt. Jerry Purvis, who came from Scotland.  “As someone from the Merchant Marine I can appreciate Worsley’s unbelievable feat of navigation [in guiding the James Caird to South Georgia].

“It was probably the most memorable service I ever expect to attend,” said Rob Arathoon, who came from the U.S.  “The fantastic choral Introit and the banjo trumped everything.”

The lasting impression for Philippa Norman, also from the U.S., was the presentation of Shackleton’s sledging flag from the Nimrod Expedition, which was carried horizontally under glass as part of the opening procession.  Congregants were not seated facing forward but sideways, facing the central aisle for viewing the processionals.

Toasting ‘The Boss’ and long-lasting friendships

After the service, the group retired to the nearby Blue Boar restaurant to raise a glass to friendship. The champagne was generously supplied by Aurora Expeditions. Those present felt the service and the reunion were the fitting climax to their polar cruise. “This is icing on the cake,” said Brian Gofton from Scotland, “a great unexpected pleasure.”

Particularly remarkable was the fact that no one organized the reunion; it grew spontaneously as word of the Westminster Abbey event spread amongst the shipmates after their cruise.  Carol Bentley, from the UK, said, “It was meant to be, the way it has all fallen into place.”  Ms. Norman reserved the Blue Boar for the after party. When Aurora Expeditions got wind of it, the company wanted to contribute. Anne Oyasaeter in the Sydney office, who was on the voyage but regretfully could not attend the service, arranged to provide the champagne.  The group congregating in London represented almost a fourth of the passengers who had been aboard the Polar Pioneer for their voyage.  They were also among those at the service who have most recently visited Elephant Island and South Georgia. “It’s absolutely magic to meet a group of people you feel so comfortable with right away,” said Jo O’Brien from Ireland.

“Today was a really good way for ending up our trip, seeing everyone in London,” expressed Jill McEwan from Scotland.

“Particularly moving was the fact that we all came back together for it from all over the world,” Mr. Arathoon observed.

“Probably the greatest thing was getting back together in another spectacular place,” agreed Judy Bannister Pike, from the UK.

Of the trip itself, Marion Lumb, who came from Australia, said, “It was a fun adventure. Everything was good.” Mr. Gofton observed, “This was my second trip.  Every trip is different. It was extraordinary.”  Capt. Purvis shared, “I’ve thought about the trip since primary school.”  He was attracted by the strength of character of the men of the Endurance. “I will go back to do the crossing,” he promises. (Aurora Expeditions offer a guided hike across South Georgia following Shackleton’s route as an option on selected cruises.) Passengers posing on Ernest Shackleton’s graveside in Grytviken in South Georgia during the voyage.

The congenial company choose 3 p.m. as the symbolic moment when Shackleton met the manager of the Stromness whaling station and the world discovered that the men of the Endurance, assumed lost, were indeed alive.  The Blue Boar served a bit of whiskey to each of the party and Capt. Purvis led a toast to the men of the Endurance and to their rescue.

“I’ve drunk more whiskey on this trip than I ever have in my life,” Ms. Norman declared [including toasts at significant junctures during the voyage, such as at Shackleton’s grave at Grytviken].  She added that the adventure “has truly been a life-changing experience.”

Mr. Vine summed up, “Thanks to Aurora Expeditions for recreating one of the most amazing journeys.”

Gary Lee and other mentioned passengers travelled on Aurora Expeditions’ In Shackleton’s Footsteps adventure in March 2016.