Officially part of Ecuador, the Galápagos Islands lie more than 900 kilometres off its western coast. The archipelago includes 18 main islands alongside three smaller ones, and combined with the small human population, is home to countless species of unique flora and fauna.

Located so far off the coast in the Pacific Ocean, many species on the Galápagos Islands have undergone natural selection and unique adaptations to survive in this part of the world. This means as part of an Aurora Expeditions trip to the region, you may able to see many bird species that are found nowhere else on the planet – a birdwatcher’s dream come true.

As such, here is our guide to the various bird species that you can spot on the Galápagos Islands.

There are six different species of boobies found around the world, with three Blue-footed, Red-footed and Nazca (Masked) calling the Galápagos Islands home. Boobies are very common seabirds and appear similar to gannets with long pointed beaks and strong wings.

However, as their respective names suggest, each one of the three Galápagos boobies species have particular physical characteristics to look out for on your Aurora Expedition. Blue-footed boobies have blue feet, red-footed boobies have red feet and Nazca boobies have a dark colouring around their face which resembles a mask.

If you are lucky enough, you might be able to witness the awe-inspiring booby dive into the sea to catch fish from your perch on the Isabela II.

In similar fashion to boobies, only a handful of the world’s frigatebird species are actually found on the Galápagos Islands; the Magnificent and the Great.

Frigatebirds are seabirds of black colouring, often located off the coast sitting on the surface of the water. Unfortunately, frigatebirds are not waterproof however, so you will only see their beaks entering the water when feeding.

With your Aurora Expeditions voyage visiting the two main islands, Santa Cruz and San Cristobal , you may see frigatebirds away from their natural habitat, enjoying the freshwater of inland ponds.

Of course, for any birdwatcher, the real feature of the frigatebird can be seen during mating season. Over this time, males feature a striking red gular pouch which is designed to attract females a sight definitely worth seeing.

Flamingos are one of the world’s most recognised birds with their signature long legs, curved necks and bright pink plumage. Globally, there are six flamingo species with the variety found in the Galápagos Islands also discovered in the Caribbean and Latin America.

However, the Galápagos Island flamingo population is under threat with current estimates at around 300-350 individual birds. On your Aurora expedition, be sure to look out for flamingos just inland from the sea around saltwater lagoons where they mostly feed on brine shrimp.

Additionally, if you see grey flamingos, they are not a new species, but young flamingos yet to develop their pink plumage. As they grow older, the aqueous bacteria and beta carotene in their diet slowly affect their colouring, thus turning grey to pink.

A photo posted by Galapagos Conservancy (@galapagosconservancy) on Jan 28, 2016 at 7:24am PST

From the most recognised to possibly the cutest birds in the world, the Galápagos penguin stands alone as the only penguin species to live north of the equator in the tropical Pacific waters.

In terms of appearance, Galápagos penguins can reach around 49 cm and 2.1 kg making them one of the smallest penguins out of the 18 species globally. As such, it can be difficult to spot them across the variety of Galápagos Islands including Santiago, one of the stops along your adventure.
While Galápagos penguins hunt mullet and sardines at sea, keen-eyed birdwatchers might see examples of burrows around caves, lava flows and crevices, if not out of the rocks of the shoreline.On a sad note, this species is under threat from climate change, with one issue being increasing sea temperatures.

A photo posted by Global Citizen Adventures (@global_citizen_adventures) on Jun 7, 2016 at 10:07am PDT

When it comes to seabirds, the Albatross is certainly the king of the sky. Albatross have the world’s longest wingspan of any bird, with adults growing up to 3.4 metres wide. Of course, they need these extraordinary wingspans to contend with the fierce ocean winds when hunting for schooling fish and squid.

Across the globe, there are 24 Albatross species, with the Galápagos Waved Albatross the only one to live entirely within the tropics. During your Aurora Expedition, your chance to see these magnificent birds in action at Espanola Island, the sole breeding site of the Waved Albatross. In fact, the colony on Espanola is more than 30,000 thanks to the ideal breeding environment and proximity to food out in the Pacific Ocean.

Petrels are one of the most common bird species across the planet with 114 varieties, including the Galápagos Petrol. While it is a seabird, this particular species is quite different given the fact that it doesn’t breed close to the ocean, instead choosing the humid highlands of the largest islands in the archipelago such as Santa Cruz, Santiago and San Cristobal

Since our expeditions travel to each of these islands, birdwatchers will have a front row view to numerous petrel breeding sites around the sloped hillsides. However, due to their location, petrels are at risk from different introduced predators such as pigs and cats, impacting the future of these large black, long-winged birds. As such, there are ongoing pest eradication programs across the Galápagos Islands. 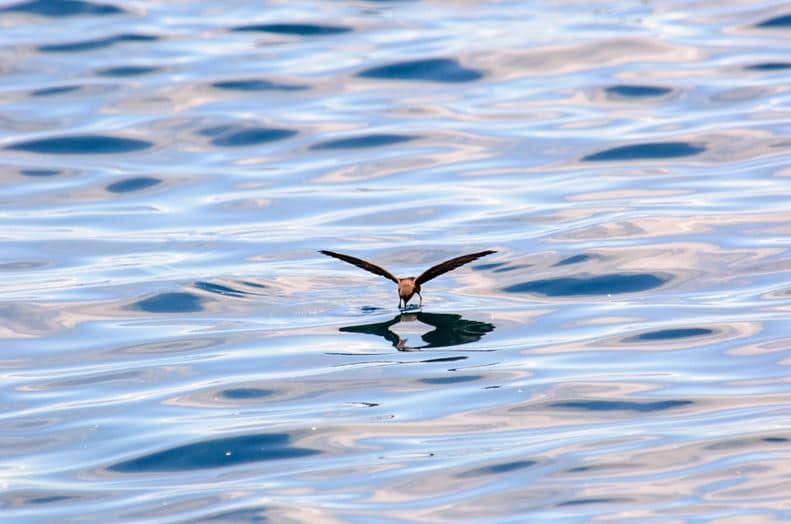 With their bright orange beaks and white/black body, the small oystercatcher is a common sight along the shoreline of many Galápagos islands including Santiago. Oystercatchers nest close to the coast, which allows them to feed on marine invertebrates at the high tide mark and around the rock pools.

Given their size, you are probably going to hear oystercatchers before you see them thanks to their loud and distinctive shrill voice. Breeding between October and March, the best way to see oystercatchers in their natural environment in on a Galápagos Island adventure with Aurora Expeditions.

If you would like more information about the fauna and flora of the unique Galápagos Islands, feel free to get in touch with our expert team today.