What Is The Life Cycle Of An Iceberg?

Home > Blog > What Is The Life Cycle Of An Iceberg?

On an Aurora Expeditions cruise around the Antarctic Peninsula, you will see a variety of landscapes. During the warmer months, much of the northern areas become free of ice, and even grow vegetation. There are many ice shelves around here, though, and the colder season can increase their size. Occasionally you will see giant mountains of frozen water floating freely in the ocean, but how did they come to be this way?

To better inform you before your next Antarctic voyage, let’s examine the life cycle of an iceberg in more detail.

From ice shelf to iceberg

Almost the entirety of the Southern Hemisphere’s icebergs are from the Antarctic, according to the National Ice and Snow Data Center. These floating giants begin their life as ice shelves attached to the mainland continent, created by flowing streams and glaciers slowly making their way into the ocean and compacting onto the ice already there. As you sail around the Antarctic Peninsula, you might see the remnants of two of these shelves: Larsen A and B.

A variety of processes can cause these great frozen masses to become stressed — erosion, movement and melting, for example — and eventually they crack.

If you hear one of our Antarctic tour experts talking about calving, chances are they aren’t discussing cows, but instead icebergs — the splitting of a berg from its ice shelf is known by this name. If a chunk comes away that is larger than 5 metres across, it will be known as an iceberg. Any smaller and it may instead be called a ‘bergy bit’ or ‘growler’. 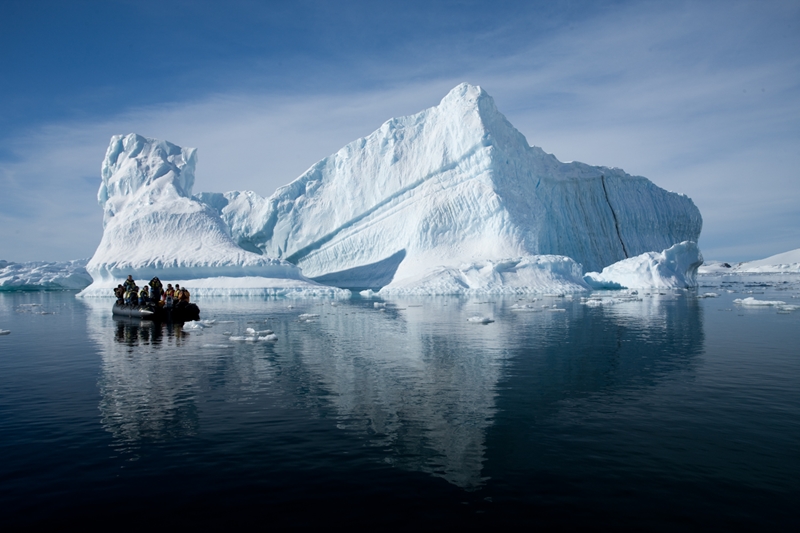 Cruising past Antarctica’s giant icebergs is a favourite activity on our expeditions.

One of the largest ever recorded was iceberg B-15, which split from the Ross Shelf in 2000 and was a length of around 273 kilometres (170 miles), according to NASA.

Floating to their final moments

From this point, icebergs drift away at varying speeds, carried by the ocean’s currents. Smaller chunks are also affected by the wind and waves, though these do not disturb larger masses as much. Most will remain in the Antarctic Circle, though some have drifted as far north as New Zealand and Australia.

As icebergs progress north, the increasingly warmer climate slowly erodes away at the mass. Air from above melts the top into little ponds and streams, while water from below begins to disintegrate the rest of the chunk. If an iceberg does not crash into more ice, beach itself in the shallows or reattach to a shelf, it will melt in warmer waters and disappear.

Ask one of our guides the next time you tour Antarctica with us, and they will point out any interesting icebergs for you to examine.